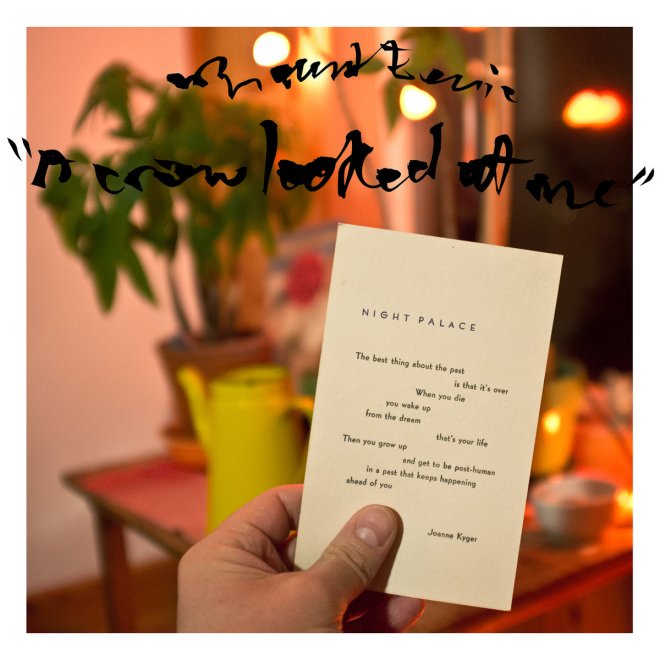 ”So we had a baby, then Geneviève got diagnosed with a very bad and advanced cancer, then we lived for just over a year in a state of panic, then she died…”

1. Mount Eerie ”Ravens”
(from A Crow Looked At Me)

”When I sing my song “Ravens” I think about two very specific places. The first one is in my yard by the firewood pile, no big deal. The second place is called Haida Gwaii. This is the name of an archipelago of islands off the coast of northern British Columbia, Canada. It’s an extremely special place. I grew up with a vague awareness of it, back when it was still named “Queen Charlotte Islands” and I had some older relatives who had settled there in the 60s and lived a very romantic and extreme existence. It’s very remote and the culture of the Haida, the first nations people there, is very present and strong.

My wife Geneviève and I went there in 2014 after 10 years together, wanting to have a baby the whole time but it just didn’t happen. While we were there we both found peace with the idea that it may never happen and maybe we should just move to this remote and beautiful place and live happily as hermit artists for the rest of our childless lives. (It wouldn’t be a great place to raise a child probably, if you believe, like I do, that a kid must be at least somewhat socialized and provided with a wide spectrum of experiences.) But when we got back from the trip she was pregnant, as if the islands had overheard us and magically decided otherwise.

So we had a baby, then Geneviève got diagnosed with a very bad and advanced cancer, then we lived for just over a year in a state of panic, then she died. Almost immediately after she died I made plans to return to Haida Gwaii without really knowing why. With an 18 month old. I loaded the car with some blankets, a tarp, some rope, an axe, some drinking water, and a baby. I drove away totally insane with grief and shock. To get there by car/ferry takes about 3 days from where I live, mostly on boats. Whales breached all around the ferries. Salmon churned in the water. Days of uninhabited islands moved by. It was a trip deep into an edge of earth that has yet to be carved up too badly by human hunger. We watched from the huge boat.

Once we arrived I immediately had symptoms of norovirus and was incapacitated for days, lying on the ground while a baby screamed and climbed on top of me, both of us weeping. There’s no hospital there and the little clinic recommended Ensure protein shakes. I stayed alive and eventually ate food and fed my daughter food. We drove out as far as we could go on the logging roads and slept next to the water, the raw Pacific side. We went in the water. I picked huckleberries for my daughter and I to eat, and absent mindedly found myself keeping some berries in my hand while walking down the trail.

In this extremely wild and remote place that held magical power over the story of my family, I wallowed on the beach rocks in August 2016 and wondered what any of it meant. Nothing felt profound, it all felt exactly as-is and brutal. I shat my pants deep in the wilderness, still sick with the cathartic poisoning. I got two flat tires at the same time. I managed to survive though and returned to town with the child and went to a Japanese restaurant. We went to the museum and I drank coffee and looked at the old cedar masterpieces, the totem poles and masks.

Actual ravens were everywhere, literally speaking to us. Huge ones. The inhuman animal spirit world was not metaphorical or distant there. To have my humanity dwarfed by a place and the things that lived there was somehow a comfort in my time of complete emotional annihilation.

I kept breathing and returned home.”